Despite King County’s frequent proclamations of their support for Equity and Social Justice, the reality faced by many workers of color at the County is a far cry from the vision fought for by Dr. Martin Luther King Jr. Equity in hiring, discipline, promotion and training is not happening on the ground. Outright bigotry – a KKK-style noose placed next to a black figurine at Metro South Base, attacks on the Pride Flag at Metro Bellevue Base, and harassment of workers of color at Solid Waste and other departments – sparked protests led by OWLS and County workers last year. Yet management continues to brush problems under the rug and retaliate against those who speak up. The storming of the U.S. Capitol tells us what happens when those in power enable bigotry. It gets worse.

In 2020, backed by the collective voices of unions, community groups, and social justice activists, Organized Workers for Labor Solidarity (OWLS) helped King County workers shine a spotlight on the ongoing racism and bigotry they endure on the job. As part of the campaign to Root out Racism at King County and Beyond! OWLS requested a meeting with County Executive Dow Constantine. Even after phone calls, letters and three rallies and speak-outs, Constantine still refused to meet or hear workers’ concerns.

These workers’ voices must not be silenced. OWLS will take the case for redress and action to the County Council. Change is urgently needed at King County. As a first step please add your organization’s support by endorsing the campaign and its demands. To endorse, please email OrganizedWorkersLS@gmail.com or call 206-819-2279. 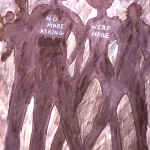 We, the undersigned, demand action NOW to end the epidemic of racism throughout King County worksites.