Across the U.S., public transit is being slashed and privatized. In the Bay Area, BART transit workers — members of SEIU and ATU — have waged a heroic strike to defend living wages and safety on the job. This fight is a byproduct of the overall attack on public transit. 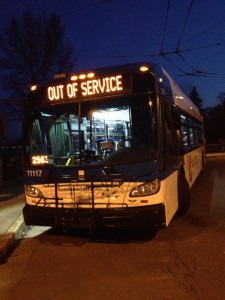 Let’s not make this Metro’s future.

Meanwhile, the tsunami of cuts is finally hitting the shores of Puget Sound full force. Metro/King County is announcing it will have to cut service by 17 percent if new funding is not forthcoming. In Pierce and Snohomish, service has already suffered from cuts of around 30 percent — leaving riders in outlying suburbs and rural areas of both counties without bus service.

OWLS has long taken the position that Mobility is a Human Right! The way to make that real is to fight for progressive, stable funding that will not be subject to ups and downs of the economy the way funding is now. Sales taxes, fare hikes, and flat excise taxes on vehicles hit the poorest people hardest. The announcement of new cuts to Metro/King County (on top of previous cuts) is both a crisis and opportunity to fight for the progressive funding public transit desperately needs. In the next few weeks, there are several opportunities to get involved in this fight. See the OWLS events section for details.

And help raise your voice with OWLS: Stop the cuts and restore service already cut. Restore rest breaks for drivers. Rollback the fare hikes. Tax the rich and wealthy corporations that are so abundant in King County to fully fund mass public transit!