By David Griffith, for OWLS 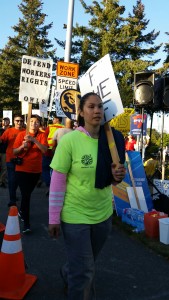 Hundreds of chanting picketers, many of them wearing union work clothes or t-shirts, demonstrated in front of the Bellevue Hilton Hotel on September 28, in Bellevue, Washington, to protest the Freedom Foundation’s annual fundraising banquet.

While picketers marched and listened to speakers, two huge inflatable balloons rocked in the wind — a pig handing out cash and a rat, belly oozing with garbage –to symbolize the Freedom Foundation’s wealthy donors.

The lively protest focused on three themes: “Stop the War on Workers,” “No to the Foundation’s racist, sexist, anti-choice, anti-LGBTQ & union-busting agenda,” and “Stand up for striking educators, immigrants, public services and the environment.” The picket, sponsored by Organized Workers for Labor Solidarity (OWLS), was endorsed by almost 50 labor and community organizations, including the Washington State Labor Council, AFL-CIO.

Jared Houston, a member of United Food and Commercial Workers Local 21 who emceed the protest, told the crowd, “OWLS believes in the fighting power of the entire labor movement. Our strength lies in our unity and our united action and our solidarity.” 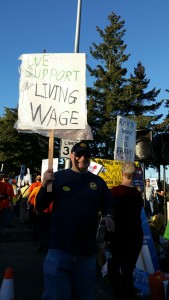 One of the popular picket line chants was aimed at the Freedom Foundation’s featured banquet speaker: “Your pardon is not forgotten. Dinesh D’Souza you are rotten.”  The Foundation called their choice for their keynote speaker “a perfect fit,” and protesters agreed he matched the think tank’s ultra-right wing agenda. Dinesh Joseph D’Souza has earned the reputation of a far-right provocateur, known for his racist tweets, books, and movies. Newsweek recently carried an article documenting his use of racist and anti-Semitic hashtags.

Picket speakers also put a spotlight on the Foundation’s funding sources. Cherika Carter of the Washington State Labor Council said, “the corporate lobbyists and the wealthy 1% in the dinner over there (in the Bellevue Hilton) are determined to rig the system and try to take away our freedom, but working people like us are fighting back… We know their anti-union campaign …will not work.  It is not working here. In Washington State we have the 3rd highest union density in the country.”

Carpenters unionist Pedro Espinoza electrified the protest addressing the U.S. Supreme Court’s decision in Janus vs. AFSCME. “It sent a message to all unions that we‘ve got to stay strong….These people [The Freedom Foundation] want us to think we have no power.… They tell us we don’t deserve to make [good] wages. They sit in those hotels built by who?  Union people!  We are the people that provide those places for them to congregate.”

Another speaker, Denise Krownbell, a union leader and co-chair of Seattle Silence 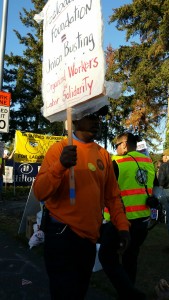 Breakers, described the labor movement’s historic support for women and people of color in fighting harassment and discrimination on the job. Her group is currently fighting such treatment of employees at the City of Seattle. “I understand the Freedom Foundation has a board member who has been accused of harassment. They not only hide harassers… but they also hide racists and fascists.”

Monserrat Padilla, a coordinator at the Washington Immigrant Solidarity Network, tied together the think tank’s anti-community, anti-immigrant rights and anti-labor agenda. Recalling her experience coming from an immigrant family, confronting exploitation and sweatshops, she said “we must stand together and take on the Freedom Foundation, the current administration, and anyone who comes after immigrants and their families.”

The Freedom Foundation has attracted the anger of many unionists who received unsolicited Foundation emails urging them to “opt out” of their unions.

Steve Hoffman who was a candidate for US Senate is a leader in the Washington Federation of State Employees Local 304. His union is directly under attack from the Freedom Foundation. “They stole our private information from our employers and now we’re being bombarded by emails.”   The Foundation “pedals an unbridled capitalism that wants to privatize all public services and break every one of our unions.” He was glad to see the diversity of unions and supporters that came out for the day’s picket.

In his parting remarks Houston reminded the picketers this “is not the end. This is a continuation of the struggle of the labor movement.  We are still fighting after all these years.  They thought we would stop but we won’t stop fighting….”

Unions and supporters who endorsed the event included: 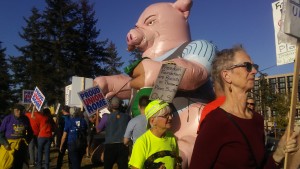