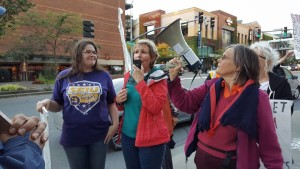 “When our unions are under attack, what do we do? Stand up, fight back!” This was the chant from nearly a hundred activists greeting anti-union attendees at a Freedom Foundation fundraising banquet last Friday.
Amidst rush hour traffic and blustery winds, protesters representing a broad range of unions walked a lively, loud, and disciplined picket line outside the Bellevue Westin Hotel to protest and expose the Foundation, which aggressively promotes “right to work” legislation against labor unions.
Feminists, socialists, transit advocates and other activists joined the picket, intermixing with unionists. Hard-hat wearing Carpenters from a nearby construction site swelled the line until the entire block was filled. The action was called by Organized Workers for Labor Solidarity (OWLS), a community labor group that “builds solidarity across union lines.”
The protest was an impressive show of growing unity against the Foundation’s ultra-right agenda. Dubbed the “Freeloaders Foundation” by picketers because right-to-work laws give union benefits to those who don’t pay union dues, the Freedom Foundation has political and financial ties to major conservative, pro-business foundations and individuals. They include Donors Trust, State Policy Network, American Legislative Exchange Council (ALEC), the Koch brothers, Walton Family and the John Birch Society.

Freedom Foundation’s campaign.
The Foundation is not only targeting unions. They oppose taxing the wealthy, government regulation of businesses such as anti-discrimination and minimum wage laws, and environmental protections. They also back charter schools, and oppose public employee pensions, funding for women’s reproductive freedom and all public services and programs.
The Foundation has been an enemy of unions since 1991, when it started harassing teachers’ unions with lengthy and expensive lawsuits. Now, using state public disclosure laws, the Foundation’s lawyers are demanding the names, birthdates, and work email addresses of all state union employees. On July 29, a Thurston County judge ruled for the Foundation, but several unions won an emergency stay and are appealing the ruling.
The group plans to use employees’ private information and voter registration records, to get state workers’ home address and phone numbers and mount a direct-contact campaign.
Currently, it is door-belling individual healthcare providers at their homes — members of Service Employees International Union Local 775 — in a well-funded campaign to pressure them to withdraw from their unions. An SEIU 775 member told the crowd of the unrelenting harassing emails and unwanted visits she has received, pressuring her to “opt out,” of the union.

Swelling counter-organizing.
Against such bullying rightwing politics and tactics, it is not surprising that Friday’s picket line in Bellevue included members of several state employee unions, Carpenters, Washington Education Association, SPEEA, Teamsters, several Retiree groups, healthcare providers, members of Hotel Employees, Restaurant Employees, and the Martin Luther King County Labor Council, to name a few.
Old and young came on Metro buses and in carpools; workers from the nearby Mall joined the picket line. Between chants, a group of teachers led the picketers in labor songs such as “Solidarity Forever.”
Home-made signs and the rank-and-file composition of the crowd gave lie to the hired “rent-a-mob” image that Foundation leaders had boosted in a failed effort to discredit the protest. At least one Foundation donor expressed surprise when he learned that protesters weren’t being “paid,” as claimed.
At a rally following the picket, electrician Steve Hoffman told the crowd, “Our solidarity is far more powerful than their big bucks.” Recording secretary of his local, Washington Federation of State Employees Local 304, he said, “If we stick together we can push them back.”
SEIU member Guerry Hoddersen said that the Foundation is “about creating a cheap workforce across the United States.” Mark Cook, a veteran prisoner rights activist and founding member of OWLS, received loud cheers when he summed up the spirit of the picket, “we are kicking ass for the working class!”
Many of the speakers expressed their commitment to confront and expose the ultra-right politics and activities of the Freedom Foundation, and to build a movement capable of uniting and defending the many different constituencies on the right wing’s hit list.
As Maxine Reigel, one of the picket organizers, said “large and disciplined counter-demonstrations against rightwing groups such as the Freedom Foundation, coupled with education, is the most effective and proven way to stop their attacks on working and poor people.”

Organized Workers for Labor Solidarity (OWLS) will picket the Freedom Foundation’s annual fundraiser on September 23, from 5-7pm in front of the Bellevue Westin at NE 6th Street and Bellevue Way NE.

The picket will protest the Freedom Foundation’s racist rightwing agenda that openly declares its goal is to “defund and bankrupt public employee unions.” OWLS is organizing the picket to defend the labor movement and public services, and to raise public awareness around the anti-worker agenda of the Freedom Foundation.

On July 29, the Freedom Foundation won a favorable decision from the Thurston County Superior Court that orders state agencies to turn over names, birthdates, and work email addresses of all employees in public sector unions to the anti-union group. In court, the Freedom Foundation announced plans to use the information, coupled with voter registration records, to get individual home addresses so state workers can be contacted at home and pressured to withdraw from their unions.  Several unions joined in an appeal to block disclosure.

The Freedom Foundation has financial and political ties to conservative billionaires. Their goals include rolling back wage, labor and anti-

discrimination legislation, environmental protections, LGBTQ and women’s rights, and blocking any tax on wealth to fund public services. The picket will educate about the Freedom Foundation’s reactionary agenda and build solidarity for labor self defense. Unions and community organizations are invited to participate and endorse the picket. To endorse, email OWLS at OWLS@riseup.net or call Jay Herzmark at 206-947-7012.