More than a year ago, OWLS packed the court to support public employees privacy rights against the ultra-right Freedom Foundation. In a recent Washington Court of Appeals decision, the bad lower court decision was overturned in favor of a ruling that upholds privacy rights and protects the birth dates and names of public workers. OWLS celebrates this victory and reports on another legal battle just getting off the ground, where the (Anti) Freedom Foundation is attacking Seattle’s right to tax its wealthiest residents as a means to address Washington State’s regressive tax structure, raise money for human services, and provide working class taxpayers some relief.
Also, hear about organizing in the apple orchards of Central Washington, where “guest workers” on H-2A visas waged a successful six-day strike to demand better treatment.

The misnamed “Freedom Foundation” is infamous for pushing racist “Right to Work” (Starve) laws that make it harder to bargain for better wages and conditions. Now, this rightwing think tank is challenging Seattle’s “high-income-earners tax” in court. The new tax, passed by the city council in July, would give some relief from our state’s superregressive tax structure. It would raise $140 million for human services with a 2.5% tax on income over $250,000 per year ($500,000 for couples). King County Superior Court, 516 3rd Ave., in Judge Ruhl’s courtroom 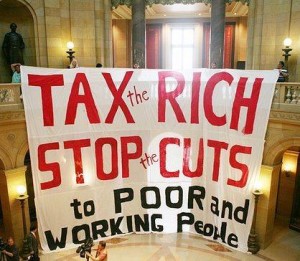