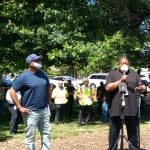 The rally, held at Metro’s South Base Complex just south of Seattle, was initiated after news surfaced of a KKK-style death threat from early June. A Black figurine was placed and photographed at a flag pole, next to a noose-like rope. The incident, said protesting Metro employees, is part of a long pattern of racial abuse and bigotry at South Base and throughout the transit agency, which has been ignored by management.

“My opinion is that it’s been covered up. Nobody wants to deal with it, it’s a hate crime,” said Juan Hood III, a Metro veteran in the Transit Facilities Division and shop steward with Amalgamated Transit Union (ATU) 587.  Hood and others addressed a full crowd, including Metro workers taking breaks to attend the protest and media crews who were there to cover it. “Racism and discrimination permeate this workplace,” said bus driver Cheryl Jones, who joined other speakers in criticizing the inaction and management bias of the Equal Employment Opportunity process.

Mechanic James Pratt described Metro’s process of addressing incidents such as the one at South Base as “toothless, even though management makes six-figure salaries.” Pratt added, “This is taxpayer money,” and called the “foot-dragging and inaction” around the incident inexcusable. Mechanic Adam Arriaga said “County ‘diversity’ efforts are mere photo ops.”  Another bus driver, Kelsen Caldwell, spoke about another incident in late June, involving vandalism of a Pride flag at Bellevue Base. Caldwell connected the racism to other acts of bigotry erupting at Metro, and concluded, “I don’t feel protected either.”

The action was initiated by ATU members in Organized Workers for Labor Solidarity (OWLS), a multiracial, cross-union activist organization. OWLS is demanding that King County Executive Dow Constantine, County Council members and Metro management take immediate and measurable action to stop racism and bigotry at Metro and throughout King County departments. The organization initiated a petition drive as part of the protest on Change.org, https://www.change.org/StopRacismAtKCMetro, which demands:

Members of ILWU, Laborers, CWA, Carpenters, UFCW and AFSCME were among the many picketers, wearing union t-shirts to reveal a broad depth of support for the picket among labor’s rank-and-file.

Marty Goodman, a retired transit worker from the New York MTA and former leader in Transport Workers Union Local 100 sent a solidarity statement that condemned the slow response of Metro to the incident, saying “I am appalled at the Seattle Authority’s conduct in this matter.” A statement of support was also issued from Paula Lukaszek, President of Washington Federation of State Employees 1488 that represents workers at the University of Washington. Doreen McGrath, speaking for the Freedom Socialist Party and Radical Women said that County Executive Dow Constantine, as the top elected official, must be held accountable for dealing with the problems at KC Metro.

The event attracted the endorsement and support of the Longshore Workers West Coast Walkout Committee/Juneteenth Celebration. Gabriel Prawl, speaking as a long-time, respected Black leader in ILWU and the A. Philip Randolph Institute, spoke to the vision of “building a labor movement that fights for all Black people and the entire working class.” The crowd cheered when Prawl ended with the famous ILWU slogan, “an injury to one is an injury to all.”

https://www.seattletimes.com/seattle-news/were-just-tired-of-whats-going-on-metro-employees-protest-racial-bias-at-transit-agency/
A Metro official said the agency was taking steps to address racism but declined to discuss specifics, saying he wanted to “honor this moment” and not enter a back-and-forth with the workers demonstrating.

Register in advance for this meeting:
https://us02web.zoom.us/meeting/register/tZIqcOCqrDkpGdfZDul7FQl2NpjXZYPoHqsr
After registering, you will receive a confirmation email containing information about joining the meeting.

The featured topic is the call from key unions for the Martin Luther King Jr. County Labor Council to expel the Seattle Police Officers Guild (SPOG) from its ranks.

SEIU Healthcare 1199 NW and UFCW 21 presented a “Resolution Affirming Our Commitment to an Anti-Racist Union Movement” that sets a deadline of June 17 for SPOG to refashion itself as an anti-racist labor organization. If the resolution’s demands are not met, MLKCLC delegates will be given the opportunity to remove SPOG from its ranks.

The Highline Education Association has also sent a demand letter to the Council that SPOG ‘be removed from the Martin Luther King Jr. Labor Council.’ Their members “see the direct impact of policing and police brutality” on their students and families. “When SPOG can call itself part of the ‘labor movement,’ it is granted further protection against reform, and proponents of police reform can be painted as anti-labor or anti-progressive.”

As a labor organization that has supported numerous strikes over the years, OWLS has seen the role of police in helping employers break strikes by enforcing unjust injunctions that forbid picketers from blocking driveways against replacement scabs. As a diverse group OWLS members can testify to the brutal role of the police in upholding a racist, exploitative economic system.

Join this important discussion about labor’s role in the exploding movement to win racial justice.