Featured Reports:
Solidarity with Striking Concrete Drivers!
Puget Sound’s construction boom is grinding to a halt as a strike by more than 300 Teamsters 174 members widens. The strike started on December 3 due to bad faith bargaining by Gary Merlino Construction, which wants drivers and plant employees to take concessions that mean losing ground against inflation. OWLS takes a close look at this latest labor battle in the construction industry — and what community and labor can do to help.

Update: MLK Labor and Rooting Out Racism
In November MLK Labor council delegates voted overwhelmingly to create an organizing committee to Root Out Racism at King County! At the committee’s first meeting on Jan. 10, workers of color told powerful stories of discrimination and retaliation at the County and discussed possible first steps to address the epidemic of injustice at its worksites. Bring your ideas on making the committee a force for change and find out how you can participate.

Labor Battles Around the Northwest
Bring news of your shopfloor fights and workplace organizing to the OWLS Meeting. And learn the latest on what other rank-and-file unionists are doing on the job to strengthen their rights and power on the job!

Join the meeting via zoom at bit.ly/Register4OWLSMeeting.

From the T174 Facebook Page:
After a brief break over the holidays, picket lines are back up as 330 Teamsters 174 members continue to withhold labor as part of an Unfair Labor Practice strike at Seattle-area construction and concrete companies. The strike began on November 19 with 34 workers at Gary Merlino Construction, but has since expanded into a general strike targeting Gary Merlino, Stoneway Concrete, Cadman, CalPortland/Glacier, Salmon Bay Sand and Gravel, and Lehigh Cement. The workers are all members of Teamsters Local 174, and are on strike in protest of the six Companies’ refusal to bargain in good faith. The contracts have been expired since July 31, 2021.
Read more: https://teamster.org/…/teamsters-local-174…/
Stay strong, brothers and sisters! 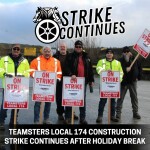