Amid the current pandemic and economic crisis strikes are breaking out across the country. Workers around the world are fighting back and raising the demand No Safety, No Work! Fruit packers in Eastern Washington are currently leading the battle for safety and respect on the job in the food production industry.

Last week, OWLS member Linda Averill joined the strikers, a racially diverse, majority immigrant workforce that may be poised to win historic gains as they fight for protective equipment and other measures, respect, and unionization against a $2.5 billion dollar industry well-known for its callous disregard of workers’ rights.

Join the OWLS meeting to hear about the strikes and updates on other labor battles, and discuss how we can make gains for all workers during the pandemic.

Zoom info below:
Please register in advance for this meeting:
https://us02web.zoom.us/meeting/register/tZMkc-morDorH9PfP7tRjKrX2Q23sVXagBq3
You will receive an immediate confirmation with log in info. 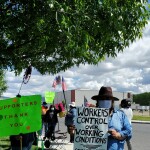 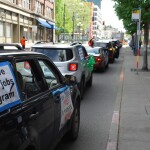 On Saturday, May 9.    A motorcade initiated by Organized Workers for Labor Solidarity (OWLS) of over 60 vehicles wound its way through the streets of Seattle.  The cavalcade assembled at a parking lot in the Industrial District, and proceeded to workplaces that highlighted conditions and demands by frontline workers, including bus drivers, postal service, hospital, grocery and meat-processing workers.  Laborers in caution-orange shirts marshalled the motorcade into the street.

As the procession circled Harborview and Swedish medical centers, University of Washington custodian Salvador Castillo reported on the lack of adequate protective supplies or training, with management saying “you don’t need to worry.”    Members and supporters of United Food & Commercial Workers 21 were stretched along the sidewalk outside the QFC at Broadway and Pike Street, cheering the motorcade as it passed.  The grocery’s corporate owner, Kroger, “amassed record-breaking profits” UFCW21 member Jeannette Randall said, “but they just said they’re stopping ‘hazard pay’ and don’t foresee extending it.”

Jared Houston also objected to the “wait and see” attitude of management “unless we push them” to act on safety concerns.  His employer PCC, “a nice friendly coop,” cannot claim poverty while supermarket sales continue to skyrocket. An OWLS member later read a statement from “Friends of Tyson Workers,”  that described how, with 251 employees testing positive for COVID-19, that non-union meatpacking plant in Walula “has restarted operations while sick employees’ basic financial and medical needs remain unmet….Washington and Walla Walla County have to hold Tyson accountable (for) an outbreak that has already caused unnecessary death.”

At the 3rd Avenue post office downtown, postal retiree Bob James talked about Trump and McConnell’s threats to destroy that grand institution, founded by Ben Franklin and enshrined in the Constitution.  “America needs to support the Postal Service” by including it in the next stimulus package from Congress, James said.  Not only is USPS “the single largest civilian employer of veterans,” but vital during the crisis for delivery of prescriptions, testing kits being prepared by the CDC, and mail ballots to ensure a fair election.  At the post office, Amalgamated Transit Union 587 members James Pratt and Linda Averill mailed a petition with over 3,000 signatures to King County Metro calling for “urgent measures to stem the spread of COVID-19.”

The motorcade ended at the shuttered Edgewater Hotel, site of a contract dispute with UNITE!/HERE 8 members until they were laid off during the shutdown of tourist activities.  Edgewater shop steward Jeremy Sharp urged everyone to donate to the local’s Hardship Fund by going to www.UniteHere8.org/donate. OWLS member Kevin Allen, President of the Puget Sound Coalition of Black Trade Unionists, said that Black and workers of color are overrepresented in those sick and being pushed back to work. “Now we’re called ‘essential,’ before we were called ‘whatever,” he said.

The diversity and breadth of the motorcade was evident where members of more than a dozen unions, community, and labor groups gathered, socially distanced, for a closing rally. Miriam Padilla read greetings of international solidarity in English and Spanish from the Mexican Partido Obrero Socialismo. Support statements from unionists in Brazil, Argentina, and from the Freedom Socialist Party in the U.S. and Australia were also read. Radical Women Organizer Gina Petry spoke to the disproportionate impact of the virus on women and people of color.

Going forward, OWLS spokeswoman Maxine Reigel rejected fantasies about “just going back to normal — ‘cause we’re not gonna do that,” calling for “30 hours work for 40 hours pay” and a massive public works program to address skyrocketing unemployment. Allen warned that “the right is out here” in rallies like one in Olympia that same day. “It’s time for us to stand up and raise our voice…all of us are ‘do-ers’ today!”

Check Facebook.com/OrganizedWorkers for continued organizing around these issues. Further actions union “do-ers” can take include the following from participants: 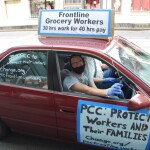 Across the U.S. front-

line workers are walking off their jobs, striking, launching petitions campaigns, and engaging in other acts of self-defense to gain protective equipment, sick leave, hazard pay and more. Equally exciting, cross-industry labor solidarity is on the rise. OWLS hosts a discussion about these critical developments, and how to build on these trends so that workers’ rights are strengthened in response to the lingering pandemic and economic crisis.

Register for the meeting on Zoom by going to https://bit.ly/owls5-15-20