At the Tuesday, July 28 meeting OWLS discusses its ongoing campaign to root out racism in King County and beyond! This meeting includes an evaluation of the July 20 picket in front of KC Executive Dow Constantine’s office — including the immediate victory of a vote by the County Council to approve needed wage raises for public transit workers in Amalgamated Transit Union Local 587.

Also featured are Northwest labor battles where anyone can share their struggles from the job. The meeting will be held on zoom and starts at 7pm. Drop in early at 6:30pm if you want to catch up with folks before the start. 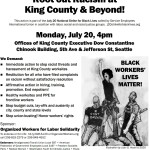 On Monday, July 20, as part of the national day of action, Organized Workers for Labor Solidarity (OWLS) is sponsoring a Picket and Rally to Root Out Racism at King County & Beyond.  Transit workers, and supporters from other unions and the community will gather at The Offices of King County Executive Dow Constantine, located at The Chinook Building, 5th Ave & Jefferson St, Seattle from 4pm-6pm.

This protest is part of an ongoing effort to bring attention to the culture of racism and discrimination that is so deeply entrenched in King County workplaces. Organizers are also calling for an end to budget cuts, layoffs and austerity measures that disproportionally impact Black and other workers of color.

Last month at Metro’s South Base Complex, a Black figurine was placed on a flagpole, near what resembled a noose.  On June 25th OWLS held a protest in response to this incident, the latest in a pattern of racial harassment and discrimination spanning many years. King County Metro has not responded to the demands presented at that rally nor taken any concrete actions.  Empty promises to “do better” and talk of “renewed commitment” ensure that the toxic climate currently endured by workers of color will remain unchanged.

Speakers from Metro’s Vehicle Maintenance, Operations and Transit Facilities divisions will discuss the need for accountability and immediate action from Executive Dow Constantine to combat the racism that exists within King County workplaces. Part-time drivers will address the layoff notices that were issued by Metro last week, and representatives from other public sector unions will speak about the double impact of racism and austerity measures in their worksites. A growing list of endorsers includes Amalgamated Transit Union Local 587. 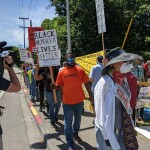 Amidst massive Black Lives Matter demonstrations against police violence, the Martin Luther King, Jr. County Labor Council (MLK Labor) voted to expel the Seattle Police Officers Guild on June 17. MLK Labor, which represents over 100,000 union members in the greater Seattle area, became the first AFL-CIO body to take such a stand.
It was a momentous victory for an alliance of rank-and-file labor activists and progressive union locals, which came together over a two-week period to win the majority vote. Organized Workers for Labor Solidarity (OWLS) played a key role in coalescing these forces.
How it all started. OWLS is a multiracial organization of labor activists which promotes cross-union solidarity in order to revitalize labor militancy and organize the unorganized. Based on their principles and real-life experiences, OWLS members believe it was a mistake to allow the Seattle’s Police Officers Guild to join MLK Labor in 2014. In addition to being an agency riddled with racism, the police have historically been used to smash labor strikes.
The Guild’s membership led to MLK Labor supporting a 2018 union contract that has been used to avoid compliance with a federal consent decree, which imposed oversight of the police department in 2012. The court-ordered decree mandated changes to address rampant racial profiling and unnecessary use of force by the Seattle Police Department, and it has been extended several times due to non-compliance. The Guild contract blocks any accountability and maintains the status quo where police are above the law – with deadly results for people of color. And the brutality continues as over 14,000 complaints of abuse have been filed in Seattle during the recent peaceful Black Lives Matter protests.
In a letter urging MLK Labor to expel the Guild, OWLS pointed to the history of the institution of policing born in the slave patrols that hunted down African Americans and returned them to slavery. Throughout U.S. history, the police have violently enforced institutionalized racism, from upholding Jim Crow laws against Blacks to carrying out “stop-and-frisk” laws that target all people of color.
The role of police. In addition to engaging in racist violence, police routinely protect white supremacist organizations. Over the last three years, police have routinely blockaded and pepper-sprayed members of OWLS and other unionists and community members at counter-protests against the confederate flag-waving, gun-toting ultra-right, neo-Nazi and anti-labor groups.
The presence of police unions inside labor councils alienates the very workers labor is trying to organize – young people, Blacks, women and immigrants. It puts those in charge of enforcing anti-worker laws, such as picketing injunctions, directly inside the House of Labor. When OWLS traveled to Eastern Washington this spring to join Yakima Valley fruit-processing workers who were striking over the lack of personal protective equipment and the right to unionize, the workers described police carrying out union-busting efforts of their bosses. Labor history is plagued with examples of Pinkertons now turned police. At the June 17 labor council expulsion, many unionists agreed.
Expulsion vote. OWLS held a strategy session and contacted like-minded unionists leading up to the July 17 labor council Zoom meeting where the vote was held. The debate and voting lasted into the night, and several OWLS members where among the council delegates who argued strongly for expulsion. The same evening, hundreds rallied in person inside the Capitol Hill Occupied Protest (CHOP) zone to show their support for a cop-free labor movement. Gil Veyna, a veteran Chicano labor activist and OWLS member, gave an impassioned address to the rally, including his personal experiences with police brutality.
The vote to expel the Guild from MLK Labor was a first step in building a labor movement that can lead in the fight for both racial and economic justice. Many of our unions are still divided on this question, so now is the time to educate and organize. The more rightward leaning unions, often in the building trades, fail to see that labor cannot grow during the economic crisis that looms before us unless it addresses the broader social issues that have galvanized a younger generation.
Promising revival. A debate is raging inside labor today: do we continue to fund the campaigns of fair-weather friends in the Democratic Party while strike funds whither? Seattle is a case in point – it is run by Democrats who shield giants like Amazon from taxation, while COVID19 spreads in their warehouses. And despite the progressive optics of a white lesbian mayor and a Black woman chief of police, this city comes down with an iron fist on protesters, while also slashing budgets and furloughing frontline city workers.
Today, as tens of thousands of people pour into the streets to protest police brutality and racist injustice, there is no ground for neutrality or conservatism by labor on these fundamental questions.
Let’s toast the victory of getting the police guild out of MLK Labor and roll up our sleeves to rebuild a labor movement — one that aggressively fights against police abuse and austerity measures and for taxing the billionaires to fund social services, healthcare, education, and a mass public jobs program for the unemployed.