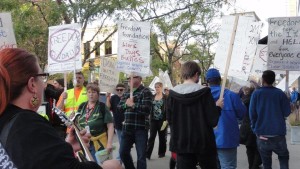 Organized Workers for Labor Solidarity (OWLS) is organizing a picket of the Freedom Foundation’s annual fundraiser on September 29, from 5-7pm in front of the Bellevue Westin at NE 6th Street and Bellevue Way NE. The ML King Jr. County Labor Council, Carpenters Local 30, Washington Federation of State Employees Local 304, and Coalition of Black Trade Unionists have endorsed. Labor and community groups are invited to endorse and participate.
The Freedom Foundation’s racist rightwing agenda openly declares its goal is to “defund and bankrupt public employee unions.” OWLS is organizing the picket to defend the labor movement and public services, and to raise public awareness around the anti-worker agenda of the Freedom Foundation.

The Foundation’s keynote speaker is fast-food billionaire Andrew Puzder, who was Donald Trump’s first pick for Secretary of Labor.  The former CEO of CKE Restaurants, Inc. (Carl’s Jr., Hardee’s, etc.), is well known for his opposition to minimum wage laws and other worker protections.  He had this to say about replacing his workers with robots: “They’re always polite, they always upsell, they never take a vacation, they never show up late, there’s never a slip-and-fall, or an age, sex or race discrimination case.”

This year the Freedom Foundation has continued efforts to make Washington a “right to work” (for starvation wages) state, and to roll back recent minimum wage increases and other labor gains. The Foundation recently filed lawsuits to stop the City of Seattle’s proposed tax on high income earners, and to prevent unionization of Uber and Lyft drivers.
The picket aims to loudly denounce the fundraiser and expose the think tank’s agenda and shared goals with big business and wealthy conservative groups, such as the American Legislative Exchange Council (ALEC) and National Right to Work Foundation. Goals include gutting wage, labor, and antidiscrimination legislation, removing environmental protections, reducing LGBTQ and women’s rights, and blocking any tax on wealth to fund public services,
To endorse the picket, or for more information, call 206-949-4552 or 206-261-1420, or email OWLS at OrganizedWorkersls@gmail.com