At last month’s meeting of Martin Luther King Labor, parliamentary maneuvers by some Council leaders led to the undemocratic suppression of a resolution to Root Out Racism at King County and Beyond, brought by two affiliate unions, Washington Federation of State Employees Locals 304 and 1488. The resolution called for MLK Labor to endorse the OWLS campaign “and champion the efforts of King County and Seattle workers facing discrimination to get a hearing at County and Seattle council meetings on the need to implement these demands.”

Despite efforts to squash debate in the meeting, campaign supporters made their voices heard loud and clear! Powerful letters of support and personal testimony explained why MLK Labor e-board officers should support the demands raised in the campaign. And during the meeting signs to Root Out Racism blared silent support in the zoom room as numerous delegates fought for the floor to demand the resolution be given a hearing and vote. It was a powerful illustration of what grassroots pressure can do!

Indeed, along with the numerous unions, community groups, and individual endorsers, the campaign’s backing has convinced MLK Labor leaders to create an alternative resolution to the one brought by WFSE 304 and 1488. But will it hold County officials accountable? Or demand immediate action? Will it include the concrete demands that County workers and OWLS developed over 19 months of protest?

Keeping the heat on is what will win the strongest possible resolution. In October, the delegate body of MLK Labor will meet again. Let’s urge them to truly support County workers by endorsing the campaign to Root Out Racism at King County and Beyond!

The meeting is on Zoom on Wednesday, October 20th at 6:00 PM. Please click here to register to attend as a guest.

Since guests are not usually permitted to speak, please click the “Let’s Root Out Racism NOW!” sign above to download a printable copy to hold up at the meeting to show support. Let’s help County workers marshal the full force of MLK Labor behind them in demanding justice and action from elected officials to Root Out Racism at King County and Beyond!

The next step in the Organized Workers for Labor Solidarity campaign to Root Out Racism At King County and Beyond! is taking it to the Martin Luther King, Jr. County Labor Council (MLK Labor) tomorrow, 9/15/21 and we need help from each of YOU to get there!

Washington Federation of State Employees (WFSE) Local 1488 and Local 304 have both submitted versions of the resolution below to the Executive Board of MLK Labor. The resolution asks MLK Labor to endorse the campaign. Even apart from the exciting prospect of the resolution passing, a frank discussion of this campaign’s demands on the Council floor would be a huge step toward mobilizing labor to fight systemic racism in ways that are concrete and effective. Some union officials are prioritizing keeping a cozy relationship with politicians like Dow Constantine over taking a public stand against the very serious racism and bigotry that County workers are facing on the job. Let’s show that labor is serious about taking action to root out racism!

The E-Board will decide at its meeting on Wednesday, September 15th whether or not to put the resolution on the agenda for the delegate meeting at 6:00 PM that same evening. Your voice will be vital in helping E-Board members and delegates make the right decision! Here are several ways you can help and participate:

1) Please click this link to email the E-Board to let them know that on September 15th you want MLK Labor to discuss, endorse, and support the OWLS campaign to Root Out Racism At King County and Beyond! — If you are in a union and/or constituency group please mention that in your email to them.

2) Please also contact your union’s MLK Labor delegates and let them know you fully support the OWLS campaign to Root Out Racism At King County and Beyond!

3) If you haven’t already, please also talk to other union members about this campaign and ask them to reach out to their delegates and E-Board members, too.

WHEREAS, workers of color in King County worksites and beyond are facing daily discrimination on the job and retaliation when they raise complaints about discrimination; and

WHEREAS, MLK Labor and the Washington State Labor Council have both passed resolutions committing our labor organizations to confronting racism on the job and within the labor movement; and

WHEREAS, the demands raised by the “Root Our Racism at King County and Beyond” campaign, launched by Organized Workers for Labor Solidarity (OWLS) in 2020, offer concrete solutions to the grievances raised by workers at Metro, Solid Waste, the King County Jail and more; and

WHEREAS, there is indisputable evidence that racism is epidemic in King County and Seattle workplaces as evidenced by: testimony given by Black, Latino and queer Metro and Solid Waste employees at three  rallies held between July and October 2020 at Metro South Base and the King County Administration Building; a September 2020 KUOW in-depth report on extreme racism facing Black King County Corrections officers, which led to the suicide of Black officer Anthony Eigner; the June 24, 2021 federal jury award of $900,252 to Black senior Metro transit operator Claude Brown for the retaliation he suffered at Metro for bringing complaints of racial discrimination; and most recently, the lawsuit filed by seven Black women union employees at Seattle Parks Department who faced decades of discrimination; and

WHEREAS, after one year of organizing to demand that racism be addressed in King County employment, affected workers have been stonewalled and the King County Executive has refused to meet with them; now, therefore be it

RESOLVED, that MLK Labor will endorse the “Root Out Racism at King County and Beyond” campaign and its demands:

• Immediate action to stop racist threats, harassment, discrimination, and all forms of bigotry and retaliation at worksites.

• Establish an independent Office of Equal Rights for complaints; Restitution for all who have filed complaints on racism without satisfactory resolution.

• No safety, no work! Healthy worksites for all workers.

AND BE IT FINALLY RESOLVED, that MLK Labor will support and champion the efforts for King County and Seattle workers facing discrimination to get a hearing at County and Seattle council meetings on the need to implement these demands.

Union Carpenters in Puget Sound have rejected three proposed labor contracts, bucking leadership to demand better wages and conditions. Despite the region’s building boom and extreme wealth, carpenters say they can’t afford to live in  the cities where they work – or even park! Come hear rank-and-filers discuss next steps in their determination to fight for their demands.
Also, join OWLS for an update on recent developments around the campaign to Root Out Racism at King County and Beyond!

The meeting is on zoom. Go to bit.ly/Register4OWLSMeeting

Compassion Seattle is pushing a Charter Amendment to “fix” Seattle’s homeless crisis — but it’s a wolf in sheep’s clothing. If passed in November, their scheme would make encampment sweeps the norm but provide no new funding for housing. Come hear from House Our Neighbors, a grassroots coalition working to expose that scheme and win real solutions to Seattle’s epidemic of homelessness, like expanding low-cost housing. Join the discussion on this working class issue!

OWLS Meeting – June 22, 630pm
UNION DEMOCRACY 101: BUILDING RANK-AND-FILE POWER
What does union democracy look like? Why is democracy essential to labor’s survival? Is your union democratic? Seasoned labor activist and OPEIU member Annaliza Torres kicks off a lively discussion about what member-driven unions can achieve and how activists can press for a greater voice and vote on the job. Bring your own experiences and ideas!
Join the meeting via zoom at bit.ly/Register4OWLSMeeting

Juneteenth – June 19, 9am
JUNETEENTH – EMANCIPATION ALL DAY LONG!
A Car rally and motorcade leaving from the ILWU Local 19 Hall at 9am will wind its way to the Terminal 46 Main Truck Entrance at 10am. Speakers and music will commence at Terminal 46 from 10am to Noon. In the afternoon a curbside commemoration will honor the life of renowned Afro-Filipino Longshoreman and founding ILWU member Frank Jenkins.The gathering will take place at 1419 24th Ave. S., Seattle, at 2pm. The event is hosted by A. Philip Randolph Institute, Committee to Stop Police Terror and End Systemic Racism, ILWU rank-and-filers, and is endorsed by OWLS. See you there!

Amazon is notorious for treating and paying its workers poorly. Yet unions are finding it hard to gain traction against the company’s aggressive union-busting tactics. What can labor do to overcome bosses like Bezos, and win?
Join OWLS in discussing these questions on Tuesday, April 27, 6:30PM.
Also: Reports on workplace struggles around Puget Sound. Bring news of yours!
Join the meeting via zoom at bit.ly/Register4OWLSMeeting 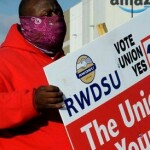 Ultra-right groups have called for Sunday, April 11, to be a national day of “White Lives Matter” rallies, including in Seattle at Westlake at 1pm. It is no accident that they are gathering to flaunt their racist ideology during the trial of George Floyd’s murderer, which is also a time of increased violence and misogyny against Asian Americans and the inhumane detention of refugee children at the border.
Together we can stop these bigots!
Bring signs, banners, noisemakers, and chants to shout out the racists and outright fascists.
Sunday, April 11, 11:30am
@ Westlake Park, 401 Pine St., Seattle
Sponsored by Stand Against White Supremacy Coalition

Warehouse workers at Amazon fulfilment centers confront brutal conditions and poverty pay. This reality has sparked a union drive in Bessamer, Alabama, led by Black women workers. The month-long vote will end on March 28. OWLS looks at the rich history of labor organizing in Bessamer, solidarity built between the civil rights and labor movements, and the current struggle to beat an anti-labor goliath that has kept  its U.S. shops union free – until now.

Friday, March 12, 6:30pm
Got news from your union or workplace to share? Info about organizing or strike support to pass on? Solidarity Check-ins are an opportunity to share our knowledge and build labor’s collective strength.
Plus updates on the Root Out Racism at King County & Beyond! campaign.

Join the meeting by going to  http://bit.ly/Register4OWLSCheck-In