This year MLK Labor is sponsoring a protest of the Freedom Foundation’s annual gala fundraiser in downtown Bellevue.  Bankrolled by billionaires and wealthy families, the Freedom Foundation is pouring millions of dollars into its campaign to convince workers to “opt-out” of paying union dues. Their goal, to bankrupt the labor movement, is part of a larger agenda that includes gutting wage and anti-discrimination laws, worker and environmental protections, taxes on the wealthy, and more. OWLS will be at the picket to “welcome” donors of this reactionary group.  See you there! 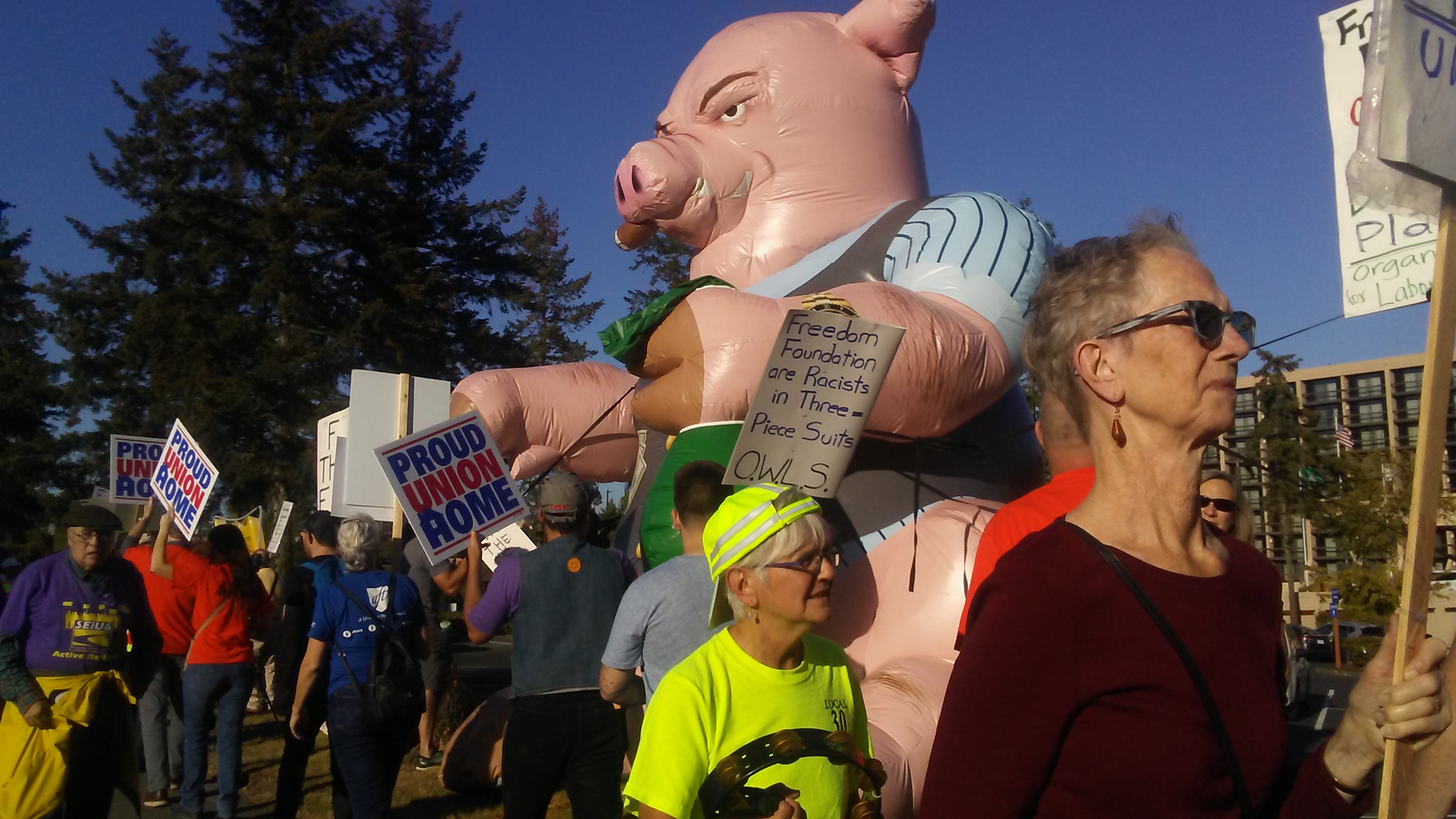 On August 7, 600 ICE agents raided seven food-processing plants in Mississippi, rounding up 680 undocumented workers. The attack, which coincided with the first day of school, was the largest single-state sweep in U.S. history, and left many school children stranded and traumatized.
Not coincidentally, workers at many of the plants were organizing and unionized; at one plant they had just won a multi-million dollar harassment case. OWLS reports on the raids and other developments in the escalating war against immigrants. Join discussion on what labor can do to fight back.
Plus hear the exciting news about the OWLS Union Strong radio ad project and check out our new website www.UnionStrong.Today.

The meeting is at the Seattle Labor Temple, Hall 6, 2700 First Ave. 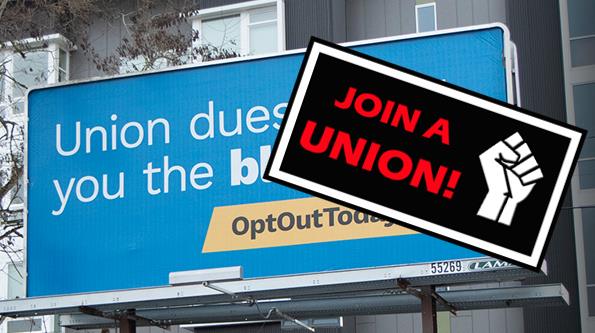 At the July 23 meeting, OWLS hosts a public discussion on how unionists can help counter the rising Alt Right

From the union-busting Freedom Foundation to the reactionary Patriot Prayer, alt-right forces are growing their attacks on the civil and labor rights of the working class.

In the Northwest, the bigots are training their guns on unions, Muslims, immigrants, Jews, radicals and more. The newly formed coalition, Community and Labor Against Fascism (CLAF) reports on today’s threat and the history of fascists attacking unions on behalf of big business. What can the organized working class do to push back against the extreme right? Learn about what labor is already doing in the fight against fascism and bring your ideas on what more can be done.

June marks the 50th anniversary of the Stonewall uprising, where police brutality at a Greenwich Village bar against drag queens and transgendered folks sparked massive protests and the birth of the modern Gay Liberation Movement. In subsequent years, gender-bender unionists have brought the struggle for full equality into the workplace. Why must unions support LGBTQ rights? What are activists doing? Bring your own story and join the discussion!

OWLS looks at the “opt-out” blitzkrieg,  including radio ads on KIRO. What do workers stand to lose if “opt out” wins, and how can labor fight back?

Su Docekal, Seattle organizer of the Freedom Socialist Party, will share information she’s researched on the toll Amazon takes on public treasuries and services from Seattle to New York City.  Plus a look into the E-commerce giant’s divide-and-conquer tactics in the labor movement. Join OWLS for a tax season discussion on what labor can do to stop corporate rip-offs! 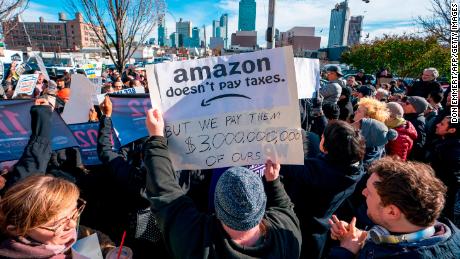 OWLS reviews a pamphlet by the National Lawyers Guild that is chock-full of ideas on what workers can ask for to strengthen their position over the life of a union contract. Bring a copy of your own union contract for a roundtable discussion on the good, bad, and ugly of existing contracts, and how they might be improved. This meeting will be an opportunity to brainstorm and trade ideas for all the unionists who have negotiations coming up in the near future.

The statement below is reprinted from a flyer distributed at a counter-protest on December 1, at Seattle City Hall against Ultra-rightists who are gathering there. OWLS is a co-sponsor of the rally.

We rally today to protect our communities from racist, anti-Semitic and misogynist violence.  The recent murders of worshipers at a Pittsburgh synagogue and African American shoppers at a Kentucky grocery store, along with rising hate crimes across the nation, show that now is not the time to be silent. Now is the time to confront the far right’s violent actions and toxic ideology.

We unite to challenge the Washington Three Percenters – an armed militia group that has previously appeared in Seattle alongside white supremacist, misogynist groups.  Three Percenters provided security for the Unite the Right gathering of torch-bearing racists in Charlottesville, Virginia last year. They are wannabe storm troopers, one among several like-minded far-right groups that appear in Seattle – from the Proud Boys (street fighters who regularly assault anti-fascist protesters) to Turning Point USA (that organizes nationally to exclude Muslims on campus and posts a Professor Watchlist threatening anti-racist faculty).

We gather also to denounce Redoubt News – a far right, online media outlet that co-sponsored today’s “Liberty or Death” rally with the Washington Three Percenters. They attack other media sources and espouse the misogynist and racist views of a far right minority.  In public they deny these views.  They try to get the media to present them as influential and respectable (with a knowing wink to their followers).

Working families are angry over stagnant low wages, unaffordable housing, crushing student debt and disappearing pensions.  The right wants that anger directed at others – struggling immigrants, people of color, women, Jewish people and other minorities – not at the obscene wealth gap and corporate profits. Their agenda includes contempt for independent thought, on campuses and in the press, and a war on labor unions.

Working people of all colors, beliefs, genders, sexualities, abilities and homelands have a common need to defeat the far right before it gets stronger and becomes a broad foundation for fascist politics.  Fascist themes include: a mythic past of white supremacist, male chauvinist “national greatness”; distortion of truth to foster “us” versus “them”; claims to be victims of the very minorities they blame and abuse; and deceit and corruption to advance the rightist program.

We are building a resistance coalition ready to defend every targeted community in our city and welcome broad participation.  For more information email 12.1.18.seattle@gmail.com  For a multiracial, united defense of everyone targeted by the far right! 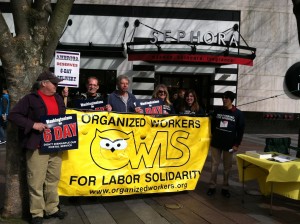 March 2013:Across the U.S., Letter Carriers rallied to save Saturday mail delivery and win a reprieve!

The U.S. Postal service traces its roots to 1775. Today, with one of the most diverse, unionized work forces in the nation, it’s also a lifeline to rural communities. Now President Trump is targeting this vital service for privatization as part of his government restructuring scheme, unveiled in June.

Meanwhile, postal unions and patrons are organizing to stop this grand theft, and held protests in October to raise public heat and resistance in Congress. OWLS features a report on what can be done to defend OUR US Postal Service.